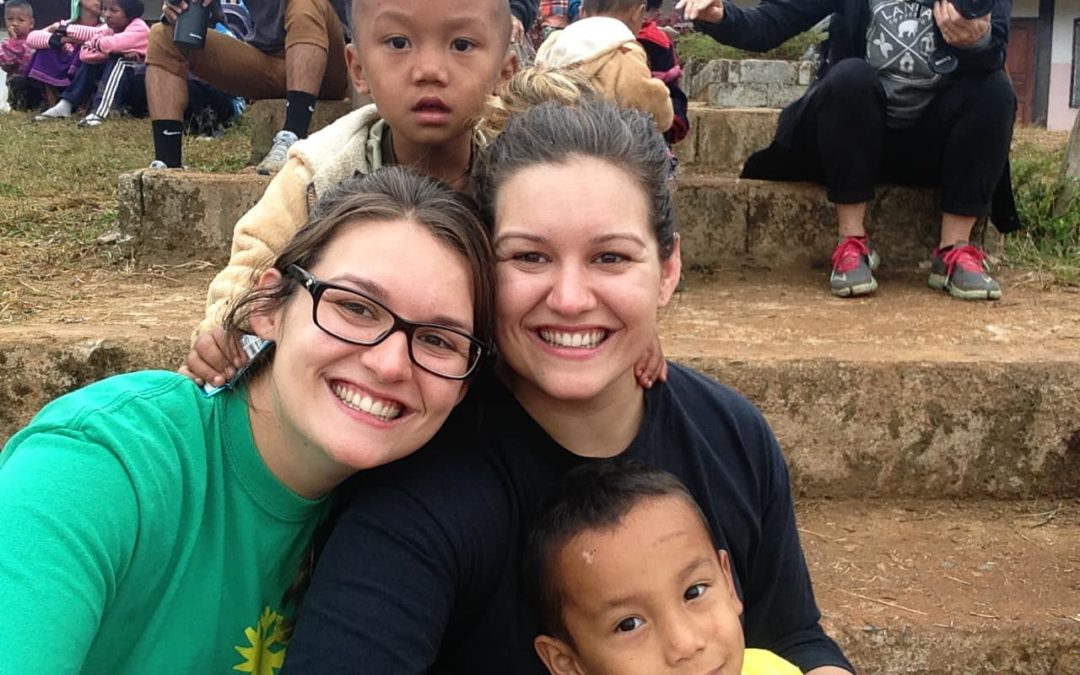 Jami Fagundes is a Lanna Foundation Board Member. This is her story of how she became involved with the Foundation and why she continues to serve.

In 2014 I started regularly attending the Well Community Church and a good friend from college who also started attending decided to sign up for a Life Group. She matched up with a group of girls in the same season of life, young professionals post-college. Not wanting her to have to go solo, myself and my sister decided to tag along. On our very first night interacting with the group, we each introduced ourselves with a brief testimony, and I’ll never forget Jessie’s.

Her story was so intertwined with an exposure trip she had taken years prior to Thailand. She shared details about the two trips she had taken there and the impact it had had on her life. The three of us girls, fresh to the group, shared the same response, “Wow. That’s really cool, sounds amazing!” But then Jessie said with an all-too-serious look on her face, “You girls need to go! Go this winter! They are taking sign-ups now!” It was summer and The Well was taking applicants for the year’s coming winter exposure trips, but it seemed a bit too intimidating to go that far, take that much time off work, and raise that much money to partake in the trip. However, God had a different plan.

In the weeks to come a promotional video would be played during a Wednesday night church service highlighting a past Thailand trip, sparking a stir within me to take the leap and sign up. I will never forget…it was a Wednesday night and Brad concluded his sermon with a not so typical request asking the crowd to, “Take the card in your seat back and write down what God has put on your heart.” So I did and the first thing that I wrote was ‘Go to Thailand.’ As I wrote those words I instantly thought, “Oh no I shouldn’t write something I’ll never do, that’s like not okay.” I still have that card today. A simple reminder that God’s plans are bigger and better than ours could ever be. Fast forward to that winter trip, five of us girls from that Life Group ended up going and it was the best choice I have ever made.

I can do all this through him who gives me strength. Philippians 4:13. I can’t even take a guess as to how many times I recited that verse while in Thailand and in the months leading up to our trip. The anxieties of meeting a group of strangers that I would journey across the world with for two weeks and the worry of having to fundraise a couple thousand dollars for the expenses of the trip seemed daunting. Wrong! Both processes were awesome. That group of strangers became like family, many of whom I continue to do life with today. The fundraising was a really fun process, and it brought our group so much closer together. We became pros at yard selling, and we were amazed by the support that poured in from strangers, family, and friends. But it wasn’t until we were in Thailand that I truly felt the reality of that Bible verse and learned first hand that He supplies strength in ways that I couldn’t imagine.

“That first trip to the hill tribes was life changing in so many ways. Until then I had not been a part of something so meaningful that would have an impact on future generations, and that would create lasting international relationships.“

The very first line of strength He supplied me with was my twin sister Julia. From my first breath she has always been by my side experiencing many firsts together, but experiencing Thailand together was my favorite. She helped me through the many anxieties of being far from the comforts of home. Another strength that He supplied me with was energy and motivation. Being in a different time zone and filling the day with major projects in the hill tribes rendered me physically exhausted. Just in our first couple of days our team started preparing and pouring a cement foundation for a new restroom, began painting the dining hall, laid the foundation for a water storage tank, built frames for an existing plant nursery, started the foundation for another, began building a structure for a new organic fertilizer facility, and handmade 53 bricks. It was quite the undertaking and took a lot out of us, but our spirits were high and through His strength our team was able to complete so many projects over our time there.

That first trip to the hill tribes was life changing in so many ways. Until then I had not been a part of something so meaningful that would have an impact on future generations, and that would create lasting international relationships. The experience in Thailand’s northern hill tribes taught me so much that I decided to go back in 2016. This second go-around was very different from my first in many ways, but God did not disappoint. A new group of strangers sprinkled with familiar faces– Julia my sister back as my hut-mate, and Michael my soon-to-be husband joined in for his very first exposure trip across seas. We had a new neighboring village to call home for two weeks. We had new projects to undertake, and I learned new lessons that God had in store for my spiritual growth, all of which made for a unique second exposure trip to Thailand.

“Experiencing the work that ITDF is doing in Thailand for the communities of the hill tribes made a lasting impression on me and fueled my desire to support the work being done there.”

In both trips I will forever cherish the first mornings spent in the village that starts at the top of the mountain at the children’s schoolhouse. It’s where all the children in the village and surrounding villages gather for the start of their day. Standing at attention in uniform lines while they raise their nation’s flag, recite their national anthem, and say the Lord’s prayer. It was on that very first morning on my first trip that I had ever heard children praying in a foreign language. Children as young as three, praying to our Lord in their native tongue is among one of the most beautiful things I have ever experienced. What really took the cake though, was when they moved into the dining hall for morning worship. I could not hold back my tears on either visit. The sound of the children’s voices singing perfectly in sync, worshiping together was a real tear jerker. Again, in a language I could not understand but to songs I knew made me think, how great is our God and how vast is His love that reaches to the ends of the earth.

Witnessing His love for the Karen people of Northern Thailand made for an experience I will never forget. Experiencing the work that ITDF is doing in Thailand for the communities of the hill tribes made a lasting impression on me and fueled my desire to support the work being done there. My stateside support began after coming home from my first trip when I became a community sponsor donating monetarily monthly to the Lanna Foundation. Then when the opportunity arose, I joined the Lanna Foundation as a board member. Through Lanna’s efforts locally we have been able to support the continual work being done by Integrated Tribal Development Foundation, ITDF, in Thailand. Because of their commitment to the hill tribes, clean water, proper sanitation practices, sustainable agriculture, and a growing education system has been made possible. Brick by brick, shovel full by shovel, change has been brought to these villagers far beyond our understanding. The light of the Lord shines bright throughout the hills of Northern Thailand. His love radiates through all the work that has been done and continues to happen here and the people of Thailand’s Northern hill tribes can see the Lord through it all, making effort to grow awareness and support through the Lanna Foundation stateside worth it.